Gimnazija Škofja Loka was established in 1950 as the only grammar school of that type
in the region with the first students coming from Škofja Loka and vicinity.
Since then it has developed into a modern grammar school with 620 students and 60 members of staff.

Facts from the history of the school 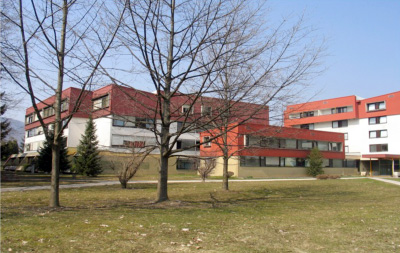 During its history Gimnazija Škofja Loka has reflected the needs and educational changes of the times. In the late 70’s Gimnazija Škofja Loka was the first school in the country organizing the scheduled programme for the sportsmen (especially skiers, members of the national ski team, following the Austrian patterns from Stams Gymnasium) and it proved to be a success. Later, in the 90’s, it opened its door to the professional sportsmen aged 14 -19.

In the 80’s and early 90’s it re-named into Secondary School of Social Sciences and Foreign Languages, which means that besides very good general science students were able to gain extra good knowledge in psychological and social studies as well as different foreign languages. And these were the grounds for the new Gimnazija (i.e. grammar school) as a type of school for general secondary education in the beginning of the 90’s, preparing students for further academic studies at university. Its official curriculum lasts four years, students are aged 14/15 – 19 and they finish the secondary education with so called Matura (very similar to A levels in the UK or Abitur in the rest of Europe).

Gimnazija Škofja Loka is a state school following the National Curriculum as stated by the Ministry of Education. Students pay no fees, they do not board, the lessons start at 7.15 in the morning and finishes at 2.30 p.m. Many students commute. 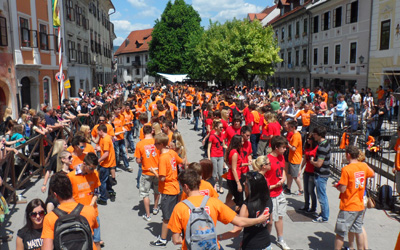 The subjects of general secondary education in Slovene secondary school may differ, but in Grammar schools (gimnazija) we teach: Slovene (mother tongue), English as the first foreign language, second foreign language could be chosen among Spanish, French, German or Russian. Some choose Latin as their third language. Geography, History, Psychology, Sociology and Computer Science, Music, Art, Physics, Chemistry and Biology are the common subjects, in the final year the students add Philosophy as one of the humanistic subjects.

Gimnazija Škofja Loka excels itself in many out-door and extra-curricular activities the teachers prepare for their students. The activities the students may join in vary from a 70 member school choir, a drama club, dancing group and DofE (Duke of Edinburgh) award which has become really interesting for more and more supporters. What is more, the teachers offer many programmes to implement the knowledge of the most gifted students in the matters of their subjects. 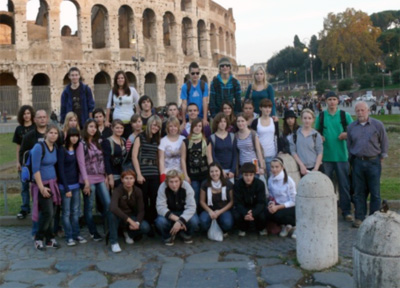 Besides these activities the students join the national and also international project days and week with partner schools: three national wide, internationally the week students’ exchange annually with the Danes (Roskilde), the Spaniards (Alcala de Henares), the Austrians (Spittal am Drau), the Germans (Blaubeurn/Ulm), the Czechs (Tabor), the Italians (Triest) and within the DofE award with the students from Truro in Cornwall (GB). Last year the Škofja Loka Municipiality offered the school to actively participate in the Douzelage networking within European towns, which opens new challenges of international cooperation and experience exchanging.

To widen their knowledge the students can join several project excursions where they combine the gained knowledge with their personal experiences: 5 days in London, 4 days in Paris, 3 days in Rome and Pompeii, 2 days in Vienna and many day travels throughout Slovenia.

Gimnazija Škofja Loka is therefore a school which offers every single student a friendly working atmosphere and the possibility to develop his or her talents in basic matters and life experiences in order to become a self-aware grown up who will be able to continue his or her professional career in academic world.